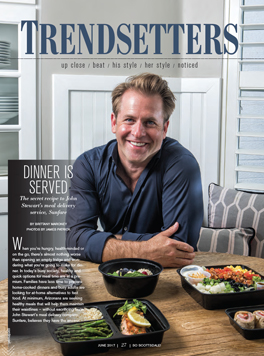 When you’re hungry, health-minded or on the go, there’s almost nothing worse than opening an empty fridge and wondering what you’re going to make for dinner. In today’s busy society, healthy and quick options for meal time are at a premium. Families have less time to prepare home-cooked dinners and busy adults are looking for at-home alternatives to fast food. At minimum, Arizonans are seeking healthy meals that will help them maintain their waistlines – without sacrificing taste. John Stewart’s meal delivery company, Sunfare, believes they have the answer.

In 1997, Stewart was living in Los Angeles, where he says he happened upon the food industry. “I’ve always had an entrepreneurial spirit, and I ended up working in the fitness industry,” he says. “At the time, the Zone Diet had become all the rage but there was one problem. Nobody had the time to make the meals. That’s where we saw the opportunity to start Sunfare and to make healthy eating easy for people.” Along with business partner Carl Ferro, Sunfare moved to Scottsdale and began addressing a very different issue. Everyone wanted something different from a plan and each client had a very different palate.

“The key was that if people didn’t like that day’s option, they wouldn’t eat it … and they wouldn’t get the results they wanted,” Stewart says. “So, we started giving people the ability to customize their own meals by removing ingredients they didn’t like and giving them different meal choices each day, so they could always find something appetizing. That kind of personalization made a huge difference and continues to set us apart today.” Now, Sunfare boasts a daily delivery service to more than 1,000 families per day across both Arizona and Los Angeles. Each personalized menu is cooked fresh daily and delivered to front doors by 7 a.m.

Sunfare offers six gourmet meal programs to fit the dietary needs of even the pickiest patron, including options for vegetarians, Paleo, gluten-free and family dining. It was back in 2001 that the Sunfare meal plans began getting national attention. During that particular summer, actor Charlie Sheen had lost weight and several media outlets wanted to know his secret. Sheen proudly championed the Sunfare service on nationally syndicated shows like The Rosie O’Donnell Show, The Tonight Show with Jay Leno, Entertainment Tonight, and On Air With Ryan Seacrest. “The next morning, phones across the Sunfare office were ringing and orders were pouring in. It was so exciting,” Stewart says. “We had no idea he was going to do that, and we’re still grateful for it.“Now, A-list eaters like Jack Black, Kim Kardashian, Eva Longoria, Ashley Greene, Mark Wahlberg and Britney Spears swear by the Sunfare meal delivery service. Stewart also notes that actress Jennifer Aniston was their sixth client. “We’ve been in the industry for close to 20 years, and one of the most rewarding parts has been building a great team, a group that believes in the collective good of the business,” Stewart says. “I’m proud to say that our team at Sunfare right now is the best, most hard working, and most passionate we’ve ever had – it’s just an awesome family to be a part of.”

Family and Community
And speaking of family, Stewart calls his wife a “rock star,” and he is a proud dad to two little boys. “I love that each day I get to do both – be an entrepreneur and daddy,” he says. “It’s super satisfying and a lot of fun to hold [my kids’] hands and guide them through life. To make it all work is a bit of a juggling act, but at the end of the day, I’m extremely fortunate.” With the meal delivery business grossing more than $400 million annually, Stewart admits it’s a competitive industry. That’s why innovation and integrity are still the roots of the Sunfare brand — and why Stewart is always looking for the newest trends in food and convenience. “Something that’s really exciting is the whole local, farm-to-table approach to food preparation. Not only is it good for the environment, but it pushes you creatively in terms of menu design and our possible meal offerings. We have an entire product line called Artisan Meals that we’re devoting to this philosophy.” For a leader like Stewart, his company is more than just the product. It’s about healthy living, family and, of course, the community.

“We’re feeling great about the direction and growth of our company, but more so, we believe in supporting the community we live and work in,” Stewart says. “That’s why, in addition to supporting several local charities, we also donate weekly meals to local food banks.” The company also calls on regular patrons of Sunfare to give back. Every December, customers are encouraged to place canned foods back in their delivery boxes for donation.

“This is a great community,” Stewart says of the Valley. “It’s our community, and Sunfare is going to make sure everyone is well fed.”

You can find out more about Stewart’s meal delivery service at www.sunfare.com. 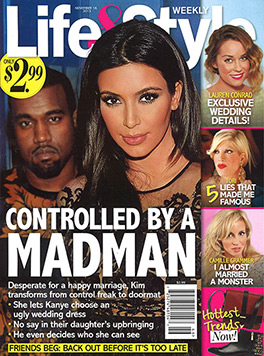 Eat this / Why it Works: - Breakfast: Oatmeal with dried cherries, brown sugar and hazelnuts
- This hearty blast of protein and fiber will stoke your energy all day long
- Other options: Vanilla yogurt, Frittata, Spinach and mushroom quiche 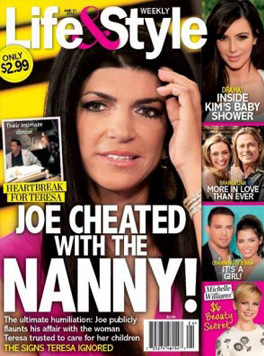 Other celeb faves like Sunfare (Eva Longoria)…are a fail-safe way to control portion size and ingredient quality and to stay on track with just a few minutes of prep time. 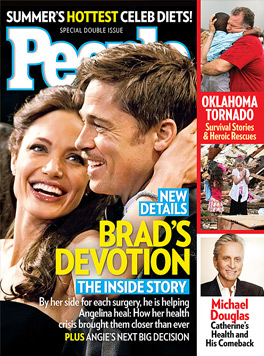 WHAT IT IS:
Daily home delivery of fresh meals made up of 30% protein, 40% healthy carbs like whole wheat and 30% “good” fats.

WHAT YOU EAT:
A typical day could include a turkey-and-egg sandwich for breakfast, a whole wheat wrap for lunch and filet mignon for dinner.

EXPERTS SAY:
“This has good nutrient breakdown, though you don’t need all that fat,” says Dr. Heber

WE TRIED IT!
PRO: Gluten-free or vegetarian plans available. CON: You’ll be that person toting plastic meal containers to restaurants. 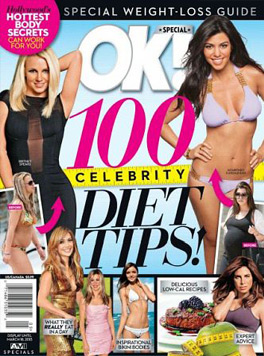 Celebrities love meal delivery and it’s no surprise. Food providers take all the guesswork out of creating healthy, balanced and calorie-conscious meals that make it easier to reach your weight loss goals. Check out some of the ones stars love best!

SUNFARE
What is it? Sunfare hand-delivers three gourmet meals and two snacks every day to clients in the Los Angeles and Phoenix areas. Meal preferences are fully customizable.
Special features: Customers have several different plans to choose from, including trendy diet regimens like gluten-free, 5-factor Diet and even a cleanse. There is also a family option, which serves up a healthy entrée and four sides for the whole gang at home. 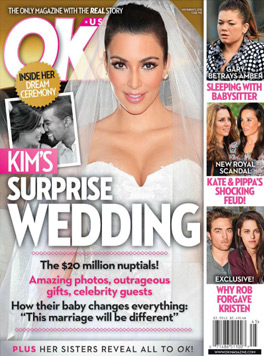 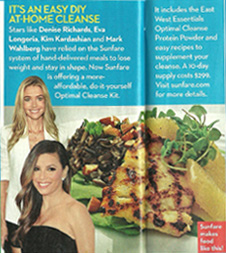 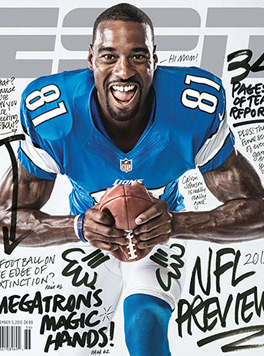 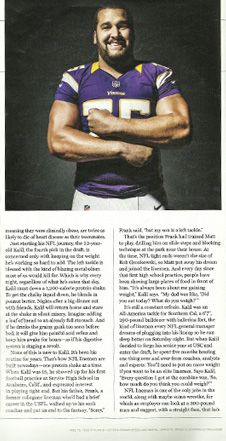 …Ryan, now a three-time Pro Bowler, isn’t telling his little brother not to bulk up, but he’s stressing that success as an NFL lineman is all about technique and putting on what he calls good weight. “I told Matt something I learned from a former strength coach: You can put a lot of extra muscle weight in your back,” Ryan says. “Not only are you getting stronger, but you’re putting on extra weight in a healthy way. Little things like that are huge.”

Last year, Ryan suggested that Matt sign up for a meal delivery service called Sunfare. Ryan had used it and raved about the benefits, Matt says. The company delivered premade healthy meals to Matt’s house each day, and when he started eating salads and chicken instead of junk food twice a day, he started to feel a huge difference. “I went from 25% body fat to 18%,” Matt says. “The biggest difference I noticed was how much more energy I had. I felt like I had more endurance, more stamina.” 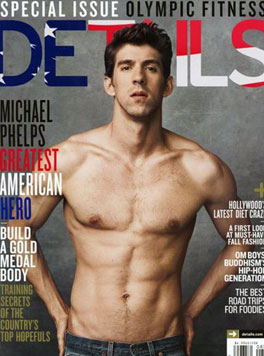 THE DIETS THAT DELIVER: 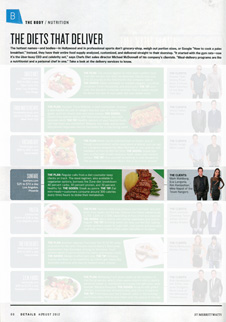 The hottest names – and bodies – in Hollywood and in professional sports don’t grocery-shop, weigh out their portion sizes, or Google “How to cook a paleo breakfast.” Instead, they have their entire food supply analyzed, customized, and delivered straight to their doorstep. 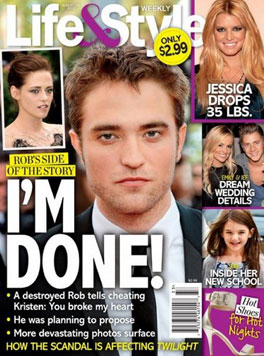 The Week IN PHOTOS:

Kim Gets Trim for Kanye Whoa! KIM KARDASHIAN picked an Agent Provocateur bikini to debut her new slimmer body in Miami Beach on July 21. “Kim’s been on a special 1,100-calorie gluten-free Sunfare diet,” a Kim insider tells Life & Style. “She wants to look good for Kanye [West], and the results are amazing!” 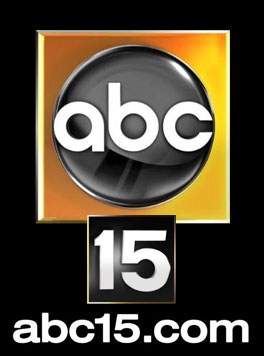 PHOENIX - Some of the sexiest stars in Hollywood are swearing by a weight loss tool based right here in the Valley.

Getting a sexy, trim body like the stars can weigh you down.

Like a lot of stressed out moms, Danielle's eating habits were horrible.

"I would eat a protein bar for breakfast and then go to work for seven to eight hours and within that time eat a handful of almonds and that's it all day," described Danielle.  "Then come home at night and eat 900 calories right before bed."

Health and nutrition's a big part of Danielle's life, but her weight kept fluctuating until she found Sunfare.

"My energy throughout the day is amazing," Danielle exclaimed.  "I'm never tired."

Danielle is now getting meals delivered right to her doorstep.

"The food's amazing," said Danielle.  "It's like eating a home cooked meal everyday."

The Sunfare diet has been featured in recent magazines like "Us Weekly."  Celebrities including Kim Kardashian, Eva Longoria and Britney Spears claim the home delivery service is their secret weapon to their sexy bodies.

He took ABC15 inside the Phoenix headquarters where dozens of workers prepare, pack and push out over 1,000 customized meals a day to clients in Phoenix and Los Angeles.

Sunfare's celebrity clients also include rapper/actor Ludacris who the company said is a huge fan.  Sunfare Federal Expresses food to him wherever he is.  Actor Mark Wahlberg is also a Sunfare client and used the meals to get in shape for his Academy Award winning film, "The Fighter."

"Whether it is for weight loss or just for the convenience, once people try Sunfare, they are hooked," said Stewart.

Sunfare's Signature Plan follows the "30/40/30" principle.  This means that for every meal and snack you eat, 30 percent of it will be lean protein, 40 percent will be carbohydrate, and 30 percent heart healthy, monounsaturated fat.

"We want to be that personal chef," Stewart said.  "We like to build an intimate relationship where we really get to know you.  That way we really set it up that you have no reason to not succeed."

The food's not only appetizing, Danielle says it's affordable.

"We offer complete programs for breakfast, lunch, dinner and two snacks for $34.95 a day," Stewart confirmed.

The Select Plan is only $34.95 per day.  The Signature Plan is a little more expensive, but it also gives you the luxury of fully customizing your meal plan.  There are also gluten free, vegetarian and family meal plans available.

Danielle said her whole family is on Sunfare including her 1-year-old daughter and 4-year-old son.

"And they love it," Boldon smiled.  "It took a minute to convince my husband because he didn't think the food was going to be great but once he did it for a week he was sold." 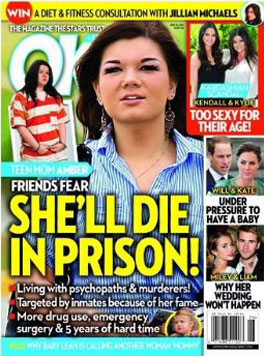 ALI DROPPED 9 POUNDS IN A WEEK WITH THIS CLEANSE: 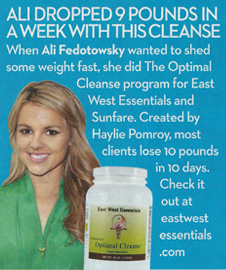 When Ali Fedotowsky wanted to shed some weight fast, she did the Optimal Cleanse program for East West Essentials and Sunfare. Created by Haylie Pomroy, most clients lose 10 pounds in 10 days. Check it out at www.eastwestessentials.com. 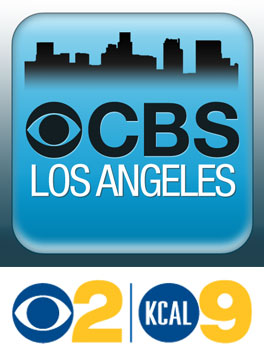 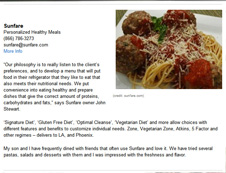 “Our philosophy is to really listen to the client’s preferences, and to develop a menu that will put food in their refrigerator that they like to eat that also meets their nutritional needs.  We put convenience into eating healthy and prepare dishes that give the correct amount of proteins, carbohydrates and fats,” says Sunfare owner John Stewart.

My son and I have frequently dined with friends that often use Sunfare and love it.  We have tried several pastas, salads and desserts with them and I impressed with the freshness and flavor.